The City is seeking community input for Market/45th transit corridor capital improvements. NE 45th Street is identified as a key corridor in the U District Station Area Mobility Plan, so it is welcome news that the Seattle Department of Transportation (SDOT) has begun to collect public input on a round of capital improvements to improve both transit service and bike/pedestrian access to transit.

Over 800 responses to their online survey have been received and meetings are planned in mid-November. Subscribe to receive notifications about this project.

The U District Station Area Mobility Plan calls out fast and reliable east-west transit as a critical function for NE 45th Street. Route 44 is the highest ridership east-west corridor in Seattle and in need of speed and reliability improvements, particularly to prepare for the high volumes of passengers who will use this route to connect to light rail. In addition to supporting existing Route 44 service, capital improvements could support the extension of transit service on NE 45th Street on the north side of UW campus, to U Village and terminating at Seattle Children's.

Aside from improving east-west transit service, the Station Area Plan identified major obstacles for people trying to walk or bike to transit that could be included in this project. NE 45th Street has two of the top twenty most dangerous intersections for pedestrian collisions in the immediate vicinity of U District Station and crossing I-5 is both dangerous and generally unpleasant for anyone on foot or on a bike.

Suggested actions for improving the I-5 overpass areas include expanding the sidewalk to create a multimodal path on one side of the bridge or adding a bike lane as well as making the adjacent two intersections pedestrian friendly.

The Station Area Mobility Plan was limited to the U District portion of NE 45th Street. Other studies of the corridor include the Seattle Transit Master Plan and the University Area Transportation Action Strategy. 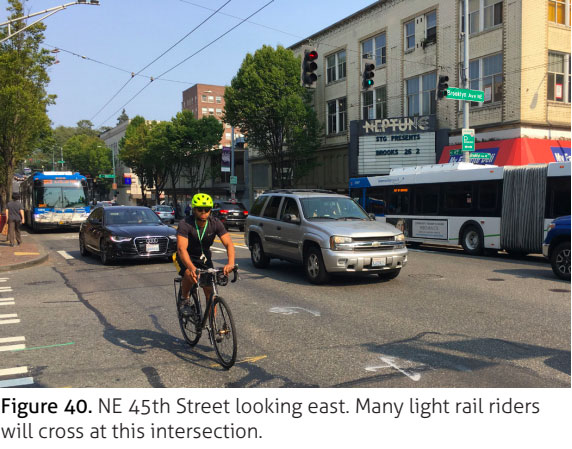 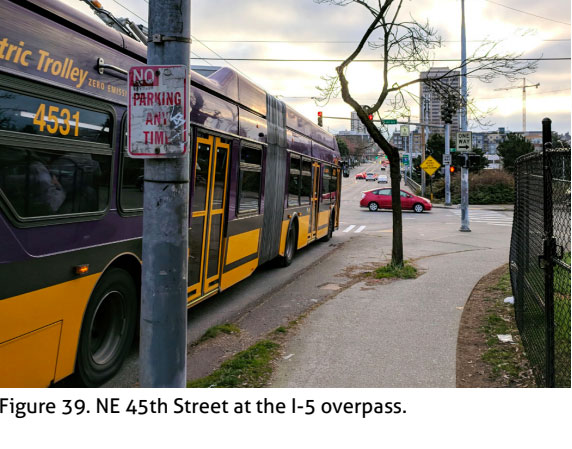 There is a pressing need for an east-west transit connection between Ballard, the U District, and east to the Sand Point area. Between 2016 and 2017, Route 44 ridership grew by 12% in a time when the rest of America saw transit ridership drop by multiple percentage points. Estimates in the Seattle Transit Master Plan already anticipated 16,000 daily riders by 2035.

Now, with a U District rezone and 20% growth anticipated at the University of Washington, ridership is poised to grow even more. Considering the surge ridership days such as football games or graduation events, there will probably be days when 20,000 people ride Route 44 in the not too distant future, perhaps as soon as 2021 or 2023.

​This points to the need to identify ways to facilitate east-west vehicular traffic, especially buses. At the same time, many community participants noted that NE 45th Street is a significant barrier to pedestrian circulation, especially at 15th Avenue NE, the Ave, and Brooklyn Avenue NE. While these vexing challenges will require further study, a few directions were identified to consider when the planning and design of NE 45th Street begins.

Within the U District, options seem limited by the constricted right of-way and narrow sidewalks. Nevertheless, the following actions are recommended:

​East-West Bicycle Route and Pedestrian/Bicycle Crossing Over I-5

A safe and convenient pedestrian and bicycle route is needed between Wallingford on the west side of I-5 and the light rail station. The actions described below are recommended to satisfy this need. The Bicycle Master Plan calls for the construction of a pedestrian and bicycle bridge across I-5 at NE 47th Street in the long-term. However, there is no funding for this project, so near-term improvements at NE 45th Street are recommended.